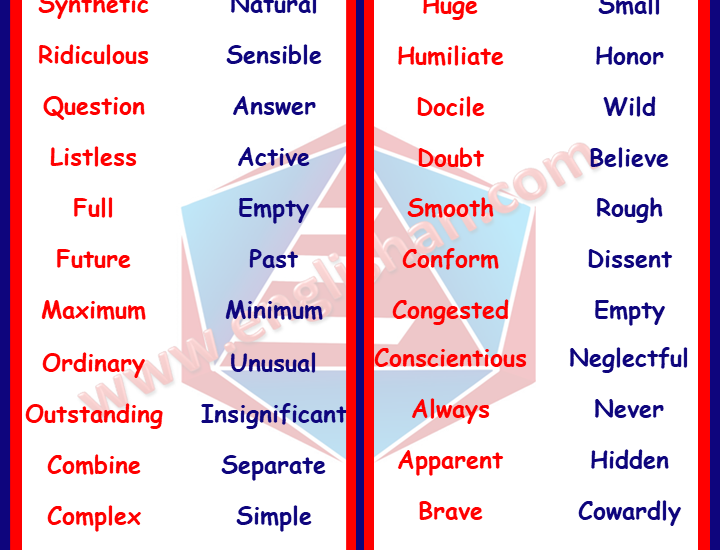 Difficult Antonyms List With Meaning & Examples: One of the most well-known sayings is “the more the merrier,” which wonderfully encapsulates the expansive range of English vocabulary. Phrases, antonyms, synonyms, idioms, homonyms, and other essential themes are included under the English vocabulary, this article is all about Difficult Antonyms List With Meaning and examples.

When all these facets of the lexicon are combined with fluid communication abilities, one becomes skilled in the language. Strengthening the various language skills will help you do better on competitive tests since English is a necessary component of many different exams.

An extensive collection of 50 challenging antonyms that you should be aware of is provided to you via this site.

A word that has the opposite meaning from another word is called an antonym. For instance, the words nice and terrible are opposites of one another.

Opposite Words for Difficult

What is the opposite of difficult?

The antonyms of difficult are:

The following are some of the most typical antonyms you should be aware of:

The town has an abundant supply of cheap labour.
Food supply was scarce during the world war.

The zoo authorities are planning to construct an artificial lake in the premises.
With the increasing climate change, we will be facing scarcity in natural resources.

She was bold enough to raise her voice for her rights.
The boy always felt timid and shy with strangers.

Aman’s intrepid personality makes him the right fit for a good team leader.
He always knew that running away from home was a cowardly thing to do.

I feel grumpy when there are too many people around me.
The village locals are sprightly and amiable.

His grandmother castigated his behaviour towards his parents.
The president praised the valour of the young soldier.

He is an affable fellow, always willing to stop and talk.
I find him aloof and unfriendly.

Meditation always helps me feel tranquil and happy.
She is usually the one to calm her excitable partner.

The next century brought the empire to its acme of excellence and fame.
The fall of the tower forecasted the nadir of his reign.

Her boundless ambition ignited the fire of perseverance in her.
His magic is only limited to the immortal world.

Apart from the aforementioned with examples, take a look at some more prominent antonyms given below: 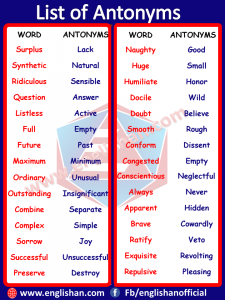 Flourish: Grow and develop in a healthy rigorous way

Construct: Build or make something typically building or road

Quiet: Making little or no noise

Suppress: Forcibly our something to end

Yearn: Have an intense feeling of longing for someone or something

Mitigate: To turn something bad into less severe or painful

Perennial: Lasting for an infinite period of time

Occasional: Occurring or done in irregular intervals of time

Clumsy/Stiff: Not easily bend or change in shape

Ruthlessness: Lack of pity or compassion for others

Amateur: Someone who is incompetent or inept for a particular activity

Pessimistic: Believing that only worst will come out of the situation

Palatable: Pleasant to taste or tasty

Tasteless: Lacking in flavour or taste

Circumscribed: Restrict something within limits

Boundless: Having no boundaries, unlimited

Apathy: Lack of interest or enthusiasm

Dearth: Scarcity or lack of something

Abundance: Present in an excessive amount

Safety: The condition of being protected or unlikely to cause danger

2. Opposite of Lazy: Active

3. Opposite of Victim: Attacker, Assailant

4. Opposite of Nocturnal: Diurnal

5. Opposite of Humble: Proud, Overbearing

6. Opposite of Heavy: Light, Thin, Wispy

8. Opposite of Wise: Stupid, Silly, Foolish

9. Opposite of Wide: Narrow, Tight, Shut

11. Opposite of Sharp: Blunt, Blurred, Indistinct

13. Opposite of Peace: Noise, Conflict, Irritation

15. Opposite of Polite: Rude, Impolite

16. Opposite of Optimistic: Pessimistic

17. Opposite of Shy: Bold, Brash, Confident

18. Opposite of Freedom: Captivity, Liability

20. Opposite of Improve: Worsen, Impair

21. Opposite of Honest: Dishonest, Insincere, Biased

22. Opposite of Dull: Bright, Interesting

23. Opposite of Proud: Ashamed, Concave, Flush

24. Opposite of Progress: Return, Regress

25. Opposite of Narrow: Wide, Broad, Spacious

26. Opposite of Expand: Contract, Shrink, Condense

27. Opposite of Clever: Stupid

28. Opposite of Support: Opposite, Contradict, Undermine

29. Opposite of Bright: Dull, Dark, Stupid

30. Opposite of Early: Late, Overdue

31. Opposite of Innocent: Guilty, Sinful

32. Opposite of Cheap: Costly, Expensive, Admirable

33. Opposite of Quiet: Loud, Public

34. Opposite of Genuine: Bogus

35. Opposite of Strong: Weak, Puny

36. Opposite of Modern: Past, Ancient

39. Opposite of Superior: Inferior, Junior, Worse

40. Opposite of Latter: Former, Prior

43. Opposite of Empathy: Apathy

44. Opposite of Steep: Gentle, Reasonable

45. Opposite of Busy: Idle, Quiet, Unrestrained

46. Opposite of Boring: Interesting

47. Opposite of Foolish: Sensible, Wise

Add a Prefix to Create an Antonym

Phew! This lengthy list of antonyms is undoubtedly intimidating, but let’s now look at some simple ways to learn antonyms using prefix:

Add a prefix in- before these words:

Add a prefix dis- before these words:

Add a prefix mis- before these words: