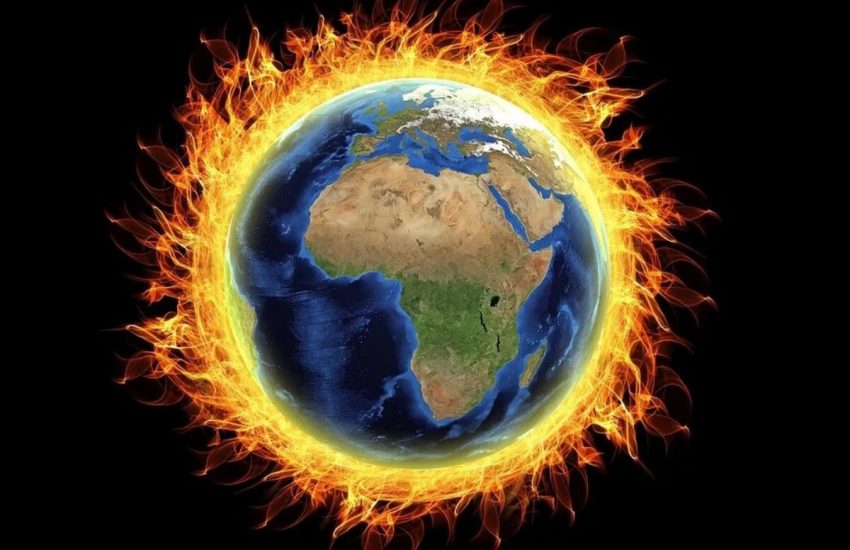 Essay on Global Warming with Samples: The key to understanding any language is having the ability to write essays. The SAT, UPSC, and other academic and scholastic exams, among many others, all include essay questions.

It is a significant component of the evaluation process for English proficiency exams like the IELTS, TOEFL, etc. The purpose of major essays is to draw attention to pressing problems that have global implications. In this blog, we’ll look into the writing abilities required and teach you how to create a essay on global warming.

The extremely quick rise in the planet’s average surface temperature over the past century is known as global warming, and it is mostly the result of greenhouse gases that are emitted when people burn fossil fuels.

Methane, nitrous oxide, ozone, carbon dioxide, water vapor, and chlorofluorocarbons are among the greenhouse gases. Every year that goes by, the seasons blend together more, and the average temperature rises. This makes it harder to predict the weather.

Since the start of the twenty-first century, the number of hurricanes, cyclones, droughts, floods, etc., has constantly increased. Global Warming is the supervillain responsible for all of these changes. The meaning of the name—the increase in Earth’s temperature—is very obvious.

As a result of human activities that have been destroying our environment for several centuries, global warming is brought on by a rise in the amount of carbon dioxide in the earth’s atmosphere.

It is impossible to ignore global warming, and action must be taken to address the issue on a worldwide scale. Over the past five years, there has been a consistent 1.5 degree Celsius increase in the annual average temperature.

More forest logging should be prohibited, and reforestation should be promoted as the greatest way to stop further harm to the environment.

Start by planting trees nearby your homes and places of business, take part in activities, and spread the word about how important it is to plant trees. Although the harm cannot be reversed, it is still feasible to halt additional damage.

Essay on Global Warming in 250 Words

Long-term trends show that the earth’s temperature is increasing. Every living thing on the planet was impacted by this, including humans, animals, and wildlife.

Because of global warming, glaciers have been melting, and many nations have experienced water shortages, flooding, and erosion. Only humans may be held responsible for global warming.

The amount of gases like carbon dioxide, CFCs, and other pollutants in the earth’s atmosphere has increased due to human activities such the emissions from power plants, transportation, and deforestation.

The major issue is how to take control of the existing situation and create a better environment for coming generations. Everybody begins out by making small steps.

Stop utilizing the high-watt lighting and start carrying around sustainable cloth bags for all of your shopping needs. Use energy-efficient lightbulbs, turn off the electricity, save water, stop deforestation, and promote tree planting. Change the way that energy is used by substituting wind and solar energy for petroleum and other fossil fuels.

Old garments can be recycled if they are donated to someone rather than being thrown out. Save paper by donating your used books. Promote global warming awareness above all else. Any effort made by an individual to protect the environment will make a difference, no matter how modest.

We need to understand that even 1% effort is better than doing nothing. Make a commitment to protect the environment and raise awareness of global warming. 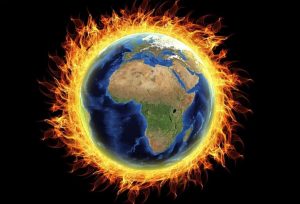 Essay on Global Warming in 500 Words

The effects of global warming are already being felt. The simplest definition of complicity is someone who denies it or is unaware of it. Is there another planet where humans could live?

We have been given only one planet that can support life, which is unfortunate, but over the years we have chosen to ignore the dire circumstances in which it finds itself. Global warming is not only a theoretical idea; it is actually a global process that is now taking place very slowly.

Every minute, the phenomenon known as global warming causes the climate on Earth to gradually get warmer.

Global warming, which is brought on by greenhouse gases that trap solar radiation in the atmosphere, has the potential to alter the whole topography of the planet by flooding many nations, uprooting entire regions, and eradicating numerous living forms.

Although it is a direct result of global warming, extreme weather is not the only effect. Global warming has an almost infinite number of negative repercussions that are all detrimental to earthly life.

Globally, the sea level is rising by 0.12 inches a year. This is taking place as a result of the polar ice caps melting due to global warming.

Due to this, floods have become more frequent in many lowland places, harming coral reefs in the process. One of the regions most severely impacted by global warming is the Arctic.

The deterioration of the air quality has been accompanied by an increase in the acidity of the ocean, which has severely harmed marine life. Global warming has a devastating impact on both human life and property, which is why it causes severe natural disasters.

Global warming will keep accelerating as long as humans continue to emit greenhouse gases. The effects are already being felt on a much smaller scale, but they will soon become drastic.

Humans have the ability to save the day; we only need to take the opportunity. Each person should cut back on their own energy use.

To prevent energy-wasting, people should be urged to purchase fuel-efficient vehicles and other electronics. Additionally, this will enhance air quality and lower the number of greenhouse gases in the environment. Only by uniting in the fight against global warming can this evil be stopped.

Better late than never, right? We shall all have a much brighter future tomorrow if we all take action today. The misery of our existence is global warming, and while numerous regulations have been implemented globally to combat it, they are insufficient.

When we combat it on a personal level, that is when we actually start to see a change. It is essential to comprehend its significance now before it becomes a mistake that cannot be corrected.

It is crucial to stop global warming, and each of us shares equal responsibility for it.

We hear about essay on global warming all the time, but do we really understand what it is? Global warming is the worst kind of evil since it has the potential to kill more people.

The term “global warming” describes the rise in earth’s temperature brought on by numerous human activities. The existence of life on the planet is under threat as a result of the earth’s rising temperature.

Despite constant study and investigation, the majority of people still view global warming as an ethereal scientific concept.

This idea has culminated in making global warming a glaring reality rather than a theoretical idea that has only been discussed in books over time.

There isn’t just one factor that can be controlled that causes global warming. There are many different things that contribute to global warming, most of them are things people encounter every day.

Burning fuels for cooking, driving, and other common purposes produces a lot of greenhouse gases like carbon dioxide and methane, among others, which hastens the process of global warming.

Rampant deforestation contributes to global warming because it reduces the amount of vegetation, which increases the amount of the greenhouse gas carbon dioxide in the atmosphere.

Immediate attention must be paid to finding a solution to global warming. Fighting against global warming must be done in unison. The first action that can be performed to prevent the dire effects of global warming is to plant more trees.

The carbon cycle will be controlled by increasing the amount of greenery. The use of renewable energy, such as wind or solar energy, which produces less pollution and consequently slows the pace of global warming, should replace nonrenewable energy.

The most crucial action that needs to be performed to combat global warming is reducing energy consumption on a personal level and avoiding energy waste in any form.

The alarm is going off to wake us up from the deep sleep of complacency we have fallen into. It is past time that we acknowledged that humans are capable of combating nature.

Fighting off the detrimental effects of global warming seems improbable given our scientific advancement and technical innovations.

We must keep in mind that we borrow the world from the next generation rather than inheriting it, and it is our duty to leave them a healthy globe where life may exist.

Climate change and global warming are two aspects of the same phenomenon. Both are connected, and they are both very important global issues.

Global warming is a result of greenhouse gases put into the atmosphere, including carbon dioxide, CFCs, and other pollutants.

The ozone layer that shields the globe from damaging ultraviolet rays has begun to develop black holes. Global warming and climate change are the results of human activity. The primary sources of industrial waste and pollutants are global warming.

Climate change and global warming are two aspects of the same phenomenon. Both are connected, and they are both very important global issues.

Global warming is a result of greenhouse gases put into the atmosphere, including carbon dioxide, CFCs, and other pollutants.

The ozone layer that shields the globe from damaging ultraviolet rays has begun to develop black holes. Global warming and climate change are the results of human activity. The primary sources of industrial waste and pollutants are global warming.

Tips To Write An Essay On Global Warming

Few people have the talents necessary to write an essay effectively, and even fewer know how to use those skills. Even though essay writing can be a difficult and perhaps frightening endeavor, there are several important guidelines that can be followed to create a great essay.

These entail paying attention to the essay’s organization, carefully organizing it, and emphasizing relevant information.

The following are some guidelines to help you produce essay an essay on global warming with better organization that will make an impact on your readers:

FAQs For Essay on Global Warming

Determine the causes of global warming.

The causes of global warming are both natural and man-made. Methane gas, volcanic eruptions, and greenhouse gases are all present in the natural one. The following man-made causes are deforestation, mining, livestock raising, burning fossil fuels, and others.

How is it possible to stop global warming?

To stop global warming, the public and the government may cooperate. More trees need to be planted, and deforestation must be outlawed. Recycling must be encouraged and auto consumption must be reduced.

How can we slow down global warming?

implementing sustainable farming, transportation, and energy practices, as well as preserving water and other natural resources.

Trust you found our article on Essay on Global Warming with Samples (150200500 words) helpful. follow our website for more interesting articles.