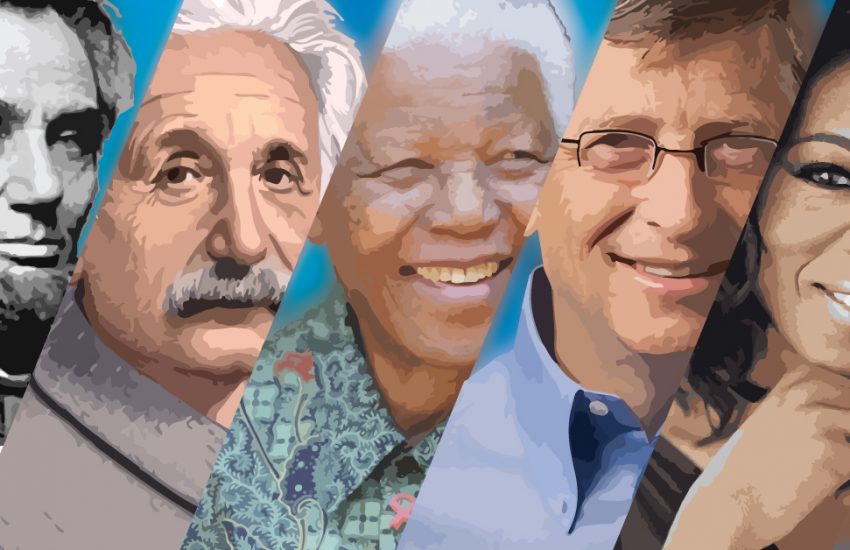 Top great leaders of the world and their Inspiring Journey: The world has been influenced by some great people, whether they were aware of it or not. Whether it was M.K. Gandhi or Nelson Mandela, a multitude of such brilliant brains have enlightened us with their knowledge and attained some truly remarkable feats that are still admired today.

Famous people from India and around the world exhibit a range of leadership philosophies. In many different professions, they are at the pinnacle of excellence.

Let’s become all enlightened and shed some light on some of the world’s great leaders.

Here are the top great leaders of the world, viz;

One of the top great leaders of the world is Mahatma Gandhi. Mohandas Karamchand Gandhi was a rebellious leader of numerous rallies that sought to liberate India.

He was born into a typical Indian household in Gujrat. He was the driving force behind important movements like Quit India, the Dandi March, and civil disobedience, all of which bear his name. He was later given the title “Father of the Nation.”

Nelson Mandela is one of the top great leaders of the world. The epitome of greatness, Nelson Mandela served as president of South Africa from 1994 to 1999.

He was a revolutionary against apartheid, philanthropist, politician, and one of the world’s great leaders. Nelson Mandela has gone through it all, from receiving a life sentence in jail in 1963 to winning the Nobel Peace Prize in 1993 for putting an end to apartheid in the nation.

Another top leader on the list of the top great leaders of the world is Winston Churchill. Winston Churchill, who is hailed as the rescuer of democracy, was a key player in Britain’s victory over the Nazis.

He was raised in an aristocratic household and served in the British army before rising to the position of Prime Minister in 1940. Among his many accolades, some include being re-elected as prime minister in 1951 and winning the Nobel Prize for literature.

Martin Luther King is one of the top great leaders of the world. MLK, who became famous throughout the world for the speech “I Have a Dream” he gave in Washington, is one of the most revered individuals in history and is regarded as one of the greatest leaders ever.

The Civil Rights Movement allowed him to continue his fight for Afro-Americans, much like Gandhi did. He adhered strictly to non-violence because he was a devout Christian.

Another great leader on the list of top great leaders of the world is Abraham Lincoln. Abraham Lincoln, the 16th president of the United States, was a revolutionary figure who sparked the spirit of the “free nation” in the country.

He was a lawyer who had won awards before deciding to go into politics. Due of his inspiring journey of guiding the nation to victory in the Civil War, words like democracy, liberty, equal rights, etc. are frequently used as synonyms for his name.

She has earned a prominent inclusion on the list of the world’s greatest leaders due to her unwavering dedication to strengthening vulnerable populations.

She served as the leader of a global society that ardently strove to open orphanages, clinics, and other facilities all around the world, including India. For her efforts to eradicate poverty, she even won the Nobel Prize.

This is one of the top great leaders of the world on the list. Napoleon Bonaparte was a renowned French military officer who later rose to prominence as a politician, and he played a significant role in the Great French Revolution.

He will always be recognized for his time as Emperor of France and for his crucial contribution to the Napoleonic Wars.

His unique position as the first and only president of the United States who was not affiliated with any political party is what makes him so great. Even the Continental Army’s triumph in the Revolutionary War is attributed to him.

One of the top great leaders of the world is Dalai Lama. Tenzin Gyatso, the 14th Dalai Lama, is regarded as one of the greatest world leaders after receiving the Nobel Peace Prize in 1989.

A farmer family in a tiny town in Tibet gave birth to him on July 6, 1935. He has persistently promoted non-violence, peace, and democracy for more over 50 years.

Another great leader on the list of the top great leaders of the world is Julias Caesar. Gaius Julius Caesar was a revolutionary figure in historical periods, and through his works, the renowned William Shakespeare glorified Caesar’s life.

He is said to have written some of the most famous Latin writing, and he is undoubtedly the most well-liked Roman politician. Given that his name is synonymous with leadership and that July is dedicated in his honor, one can estimate the scope of his legacy.

This is one of the top great leaders of the world. FDR, sometimes known as Franklin Delano Roosevelt, was a prominent American politician who led and helped his nation through some of its darkest eras, including the Great Depression.

Despite being more than 80 years old, FDR’s leadership lessons are still relevant for business executives today, especially for those in charge of steering a company through challenging times.

At the age of 29, Roosevelt contracted polio, leaving him with two damaged legs. Nevertheless, he was chosen to serve as president in 1933, and up until his death in 1945, he was the only president to be chosen for a fourth consecutive term. Every day of his life, he has displayed tremendous bravery.

Asoka is one of the top great leaders of the world. The epithet “The Great” was bestowed upon Ashoka or Asoka, another Indian emperor of the Gupta dynasty. He was Chandragupta Maurya’s grandson, who established the Gupta dynasty.

From 269 BC until his death, Asoka the Great was the last ruler of the Maurya empire.

His realm spanned almost the whole Indian subcontinent, and he too made large conquests. He is now known as a well-known Buddhist advocate who taught the populace Buddhist tenets and life lessons from the Buddha.

One of the top great leaders of the world is Alexander, The Great. The greatest military leader of all time is generally agreed to be Alexander the Great, also referred to as the “Man Who Conquered the World.”

At the age of 33, he was in charge of the largest empire in human history, which spanned from Greece to Egypt to India. He was born in 356 BC.

The greatest military leader to have ever lived, he was the King of Macedonia. The remarkable task of bringing together several Greek city-states was accomplished by him. Until his death from malaria in 323 BC, he had never lost a battle.

By the time Ranjit Singh was born in 1780, the province had become politically unstable, economically poor, and religiously divided due to Afghan invasions, protracted infighting among Punjab’s several sovereign kingdoms, and the approaching danger of British expansion.

With the elevation of Maharaja Ranjit Singh, all of this was altered. Punjab and Northwest India enjoyed a golden age during his leadership.

He was a devoted Sikh who led efforts to restore important shrines to his faith, including the Harmandir Sahib or “Golden Temple” in Amritsar, but he also made great efforts to defend religious freedom within his own country.

His empire employed people from all castes, religions, and walks of life in its administrative and military functions. Under his leadership, infrastructure was updated, trade was opened up and grown, and the arts grew.

Bill Gates is one of the top great leaders of the world. We also included an individual who serves as an example for all innovators on our list of the greatest leaders in history. The vision and leadership of Bill Gates, a multibillionaire American businessman and philanthropist, have motivated a whole generation of creators.

Before he was 13 years old, Bill had never used a computer in school. He paid a fee to use it, and after his credit card was exhausted, he gained access to the system and utilized it without paying.

You could say that young Bill was destined for a creative and progressive career in IT at this time. In his adolescence, at the age of 15, he founded a business with his friend Paul Allen.

They didn’t realize that five years later, they would be changing how people communicate and conduct business all around the world. He reorganized and created modern IT, which is now utilized by millions of people worldwide.

Gates has routinely been recognized as one of the world’s wealthiest people for more than 20 years, and in 2016, Forbes surpassed this ranking by designating him as the richest man in the world.

See also:
TOTAL COST OF LIVING AND STUDYING IN CANADA FOR INTERNATIONAL STUDENTS

Trust you found our article on Top Great Leaders Of The World And Their Inspiring Journey helpful. follow our website for more interesting articles.