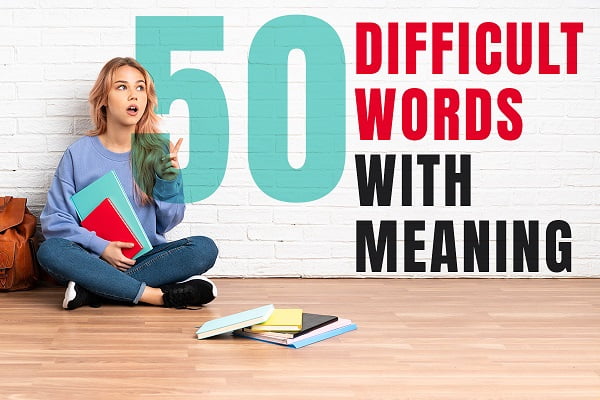 50 difficult worlds with meanings: Really? Is it a factor that is important when preparing for tests that are competitive? Or is it even something you ought to bother with? Yes is the obvious response.

In both life and competitive exams, having a strong vocabulary can help you advance. Are you prepared to learn new words that are challenging to understand? Here is a list of all 50 difficult worlds with meanings and their definitions.

50 difficult worlds with meanings and Examples

Here is the list of difficult worlds with meanings

2. Aggrandize /əˈɡrandʌɪz/: enhance power, wealth or status
Example: It was an action intended to aggrandize the Frankish dynasty.

3. Alacrity /əˈlakrɪti/: Eagerness
Example: He accepted the invitation with alacrity.

4. Anachronistic /ənakrəˈnɪstɪk/: misplaced chronologically
Example: He is rebelling against the anachronistic morality of his parents.

5. Archetypal /ˌɑːkɪˈtʌɪp(ə)l/: quintessential of a certain kind
Example: She is the archetypal country doctor.

6. Ascetic /əˈsɛtɪk/: one who practices self-denial as part of spiritual discipline
Example: She has adopted an ascetic life of prayer, fasting, and manual labour.

7. Beguile /bɪˈɡʌɪl/: influence someone in a deceptive way
Example: He beguiled the voters with his good looks.

Read Also:15 Ways To Get Paid To Translate Language Online In 2022 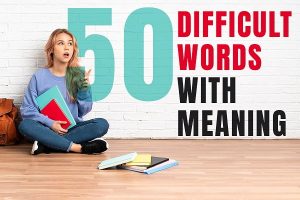 8. Blandishment /ˈblandɪʃm(ə)nt/: intentional flattery for persuasion
Example: The blandishments of the travel brochure.

9. Cajole /kəˈdʒəʊl/: persuade by flattery or coaxing
Example: He hoped to cajole her into selling the house.

10. Callous (/ˈkaləs/: disregard for others
Example: Her callous comments about the murder made me shiver.

11. Camaraderie /kaməˈrɑːd(ə)ri/: a sense of solidarity arising out of familiarity and sociability
Example: I like the enforced camaraderie of office life.

12. Circumlocution /ˌsəːkəmləˈkjuːʃ(ə)n/: expressing someone in an indirect way
Example: His admission came after years of circumlocution.

13. Clamor /ˈklamə/: proclaim something noisily
Example: The questions rose to a clamour in the meeting.

14. Cognizant /ˈkɒ(ɡ)nɪz(ə)nt/: awareness or realization
Example: Politicians must be cognizant of the political boundaries within which they work.

15. Construe /kənˈstruː/: interpret or assign meaning
Example: His words could hardly be construed as an apology.

17. Demagogue /ˈdɛməɡɒɡ/: a political leader who uses rhetoric to appeal to prejudices and desires of ordinary citizens
Example: The minister is a gifted demagogue with particular skill in manipulating the press.

18. Denigrate /ˈdɛnɪɡreɪt/: belittle someone
Example: There are many doom and gloom merchants who denigrate their own country.

19. Didactic /dɪˈdaktɪk/: instructive with a moral intent
Example: It is a didactic novel that set out to expose social injustice.

20. Disparate /ˈdɪsp(ə)rət/: of a distinct kind
Example: They inhabit disparate worlds of thought.

Read Also: Where To Sell Pallets For Big Money In 2022

21. Eclectic /ɪˈklɛktɪk/: deriving the best ideas and styles from a diverse range of sources
Example: My university is offering an eclectic mix of courses.

22. Egregious /ɪˈɡriːdʒəs/: reprehensible or outrageously bad
Example: It is an egregious abuse of copyright.

23. Embezzlement /ɛmˈbɛzlm(ə)nt/: misappropriation of funds
Example: He has charges of fraud and embezzlement.

25. Ephemeral /ɪˈfɛm(ə)r(ə)l/: lasting for a short duration
Example: Fads are ephemeral: new ones regularly drive out the old.

26. Equanimity /ˌɛkwəˈnɪmɪti/: maintaining composure in stressful situations
Example: He accepted both the good and the bad with equanimity.

27. Fatuous /ˈfatjʊəs/: devoid of intelligence
Example: It was a fatuous comment.

29. Iconoclast /ʌɪˈkɒnəklast/: someone who criticizes or attacks cherished ideas and beliefs
Example: His son Gegnesius in 722 was taken to Constantinople, where he won over to his opinions the iconoclast emperor, Leo the Isaurian.

30. Idiosyncratic /ˌɪdɪə(ʊ)sɪŋˈkratɪk/: something peculiar to an individual
Example: He emerged as one of the great, idiosyncratic talents of the nineties.

31. Incumbent /ɪnˈkʌmb(ə)nt/: something that is morally binding
Example: The government realized that it was incumbent on them to act.

32. Inveterate /ɪnˈvɛt(ə)rət/: habitual
Example: She is an inveterate gambler.

33. Libertarian /ˌlɪbəˈtɛːrɪən/: someone who cherishes ideas of free will
Example: He is studying libertarian philosophy.

Read Also: Where To Sell Pallets For Big Money In 2022

34. Licentious /lʌɪˈsɛnʃəs/: someone who is promiscuous
Example: The ruler’s tyrannical and licentious behaviour.

35. Largess /lɑːˈ(d)ʒɛs/: Kindness or Generosity in bestowing gifts or money
Example: The king can’t bestow these costly jewels with such largess

37. Obdurate /ˈɒbdjʊrət/: being stubborn and refusing to change one’s opinion
Example: I argued this point with him, but he was obdurate.

38. Ostracism /ˈɒstrəsɪz(ə)m/: excluding a person or certain section from society by majority consent
Example: “I argued this point with him, but he was obdurate”

40. Pertinacious /ˌpəːtɪˈneɪʃəs/: someone who is stubbornly unyielding
Example: She worked with a pertinacious resistance to interruptions.

41. Phlegmatic /flɛɡˈmatɪk/: expressing little or no emotion
Example: He portrays the phlegmatic British character on the show.

42. Promulgate /ˈprɒm(ə)lɡeɪt/: to broadcast or announce
Example: These objectives have to be promulgated within the organization.

43. Quotidian /kwɒˈtɪdɪən/: something that is of daily occurrence
Example: The car sped noisily off through the quotidian traffic.

45. Sanctimonious /ˌsaŋ(k)tɪˈməʊnɪəs/: pretense of being morally pious to exhibit moral superiority
Example: What happened to all the sanctimonious talk about putting his family first?

46. Solipsism /ˈsɒlɪpsɪz(ə)m/: the philosophical theory that only the self-existence is known and all that exists
Example: We cannot avoid the popularity of solipsism mentality.

47. Travesty /ˈtravɪsti/: distorting facts or imitation
Example: The absurdly lenient sentence is a travesty of justice.

48. Ubiquitous /juːˈbɪkwɪtəs/: omnipresent or existing everywhere
Example: His ubiquitous influence was felt by all the family.

49. Vicissitude /vɪˈsɪsɪtjuːd/: an unwelcome or unpleasant change in circumstances or fortune
Example: Her husband’s sharp vicissitudes of fortune.

50. Vociferous /və(ʊ)ˈsɪf(ə)rəs/: something or someone who is offensively/ conspicuously loud.
Example: He was a vociferous opponent of the takeover.

A list of straightforward words with typical usage definitions is provided below, including some of the following:

2. Base: The lowest part or edge of something, especially the part on which it rests or is supported.

3. Behaviour: The way in which one acts or conducts oneself, especially towards others.

4. Belief: An acceptance that something exists or is true, especially one without proof.

5. Birth: The emergence of a baby or other young from the body of its mother; the start of life as a physical separate being.

6. Answer: A thing that is said, written, or done as a reaction to a question, statement, or situation.

7. Approval: The belief that someone or something is good or acceptable.

8. Bread: Food made of flour, water, and yeast mixed together and baked.

9. Breath: An inhalation or exhalation of air from the lungs.

10. Brother: A man or boy in relation to other sons and daughters of his parents.

11. Building: It is a structure with a roof and walls, such as a house or factory.

12. Burn: (Of a fire) produce flames and heat while consuming a material such as coal or wood.

13. Business: It refers to a person’s regular occupation, profession, or trade.

14. Butter: It is a pale yellow edible fatty substance made by churning cream and used as a spread or in cooking.

15. Current: Belonging to the present time; happening or being used or done now.

16. Damage: Physical harm that impairs the value, usefulness, or normal function of something.

17. Danger: The possibility of suffering harm or injury.

18. Daughter: A girl or woman in relation to either or both of her parents.

19. Day: Each of the twenty-four-hour periods, reckoned from one midnight to the next, into which a week, month, or year is divided, and corresponding to a rotation of the earth on its axis.

20. Death: The action or fact of dying or being killed; the end of the life of a person or organism.

21. Decision: A conclusion or resolution reached after consideration.

22. Detail: An individual fact or item

23. Development: The process of developing or being developed.

24. Direction: A course along which someone or something moves.

25. Comparison: A consideration or estimate of the similarities or dissimilarities between two things or people.

26. Competition: The activity or condition of striving to gain or win something by defeating or establishing superiority over others.

27. Connection: A relationship in which a person or thing is linked or associated with something else.

28. Cook: To prepare (food, a dish, or a meal) by mixing, combining, and heating the ingredients.

29. Country: A nation with its own government, occupying a particular territory.

30. Cover: To put something on top of or in front of (something), especially in order to protect or conceal it.

31. Credit: It is the ability of a customer to obtain goods or services before payment, based on the trust that payment will be made in the future.

32. Cry: To shed tears, typically as an expression of distress, pain, or sorrow.

33. Care: The provision of what is necessary for the health, welfare, maintenance, and protection of someone or something.

34. Cause: A person or thing that gives rise to an action, phenomenon, or condition.

35. Chance: It is the probability of something desirable happening.

36. Change: Make (someone or something) different; alter or modify.

37. Cloth: A woven or felted fabric made from wool, cotton, or a similar fibre.

38. Colour: The property possessed by an object of producing different sensations on the eye as a result of the way it reflects or emits light.

39. Comfort: A state of physical ease and freedom from pain or constraint.

41. Art: The expression or application of human creative skill and imagination, typically in a visual form such as painting or sculpture, producing works to be appreciated primarily for their beauty or emotional power.

42. Attack: Take aggressive military action against (a place or enemy forces) with weapons or armed force.

44. Blood: The red liquid that circulates in the arteries and veins of humans and other vertebrate animals, carrying oxygen and carbon dioxide from the tissues of the body.

46. Body: The physical structure, including the bones, flesh, and organs, of a person or an animal.

47. Account: A report or description of an event or experience OR a record or statement of financial expenditure and receipts relating to a particular period or purpose.

48. Air: The invisible gaseous substance surrounding the earth, a mixture mainly of oxygen and nitrogen.

49. Amount: A quantity of something, especially the total of a thing or things in number, size, value, or extent.

50. Animal: A living organism that feeds on organic matter, typically having specialized sense organs and nervous system and able to respond rapidly to stimuli.

Nice work! Which of these 50 Difficult Words with Meanings are you truly able to recall? Do not urinate. Be sincere. Even if you can’t recall any of these difficult words at the moment, it’s okay.

The effort of familiarizing yourself with new, challenging terms, especially those that we don’t use in ordinary conversation, can seem insurmountable and exhausting, but fear not—a few straightforward tactics can go a long way.

Learning tough English words can appear monotonous, but you can make this activity more fascinating and fun. When we engage in activities that look more fun, our minds are more active and we tend to learn better.

The enjoyable exercise will keep you interested and aid in helping you remember those challenging terms. You and your friends can create placards with challenging words and challenge one another with their meanings.

If participating in group activities doesn’t seem like the best option for you, you can make a list of the challenging words and review them before bed. Since our brain tends to review the things we learn and observe during the day while we sleep, doing this may help you learn the material more effectively.

Trust you found our article on 50 Difficult Worlds with Meanings helpful. follow our website for more interesting articles.